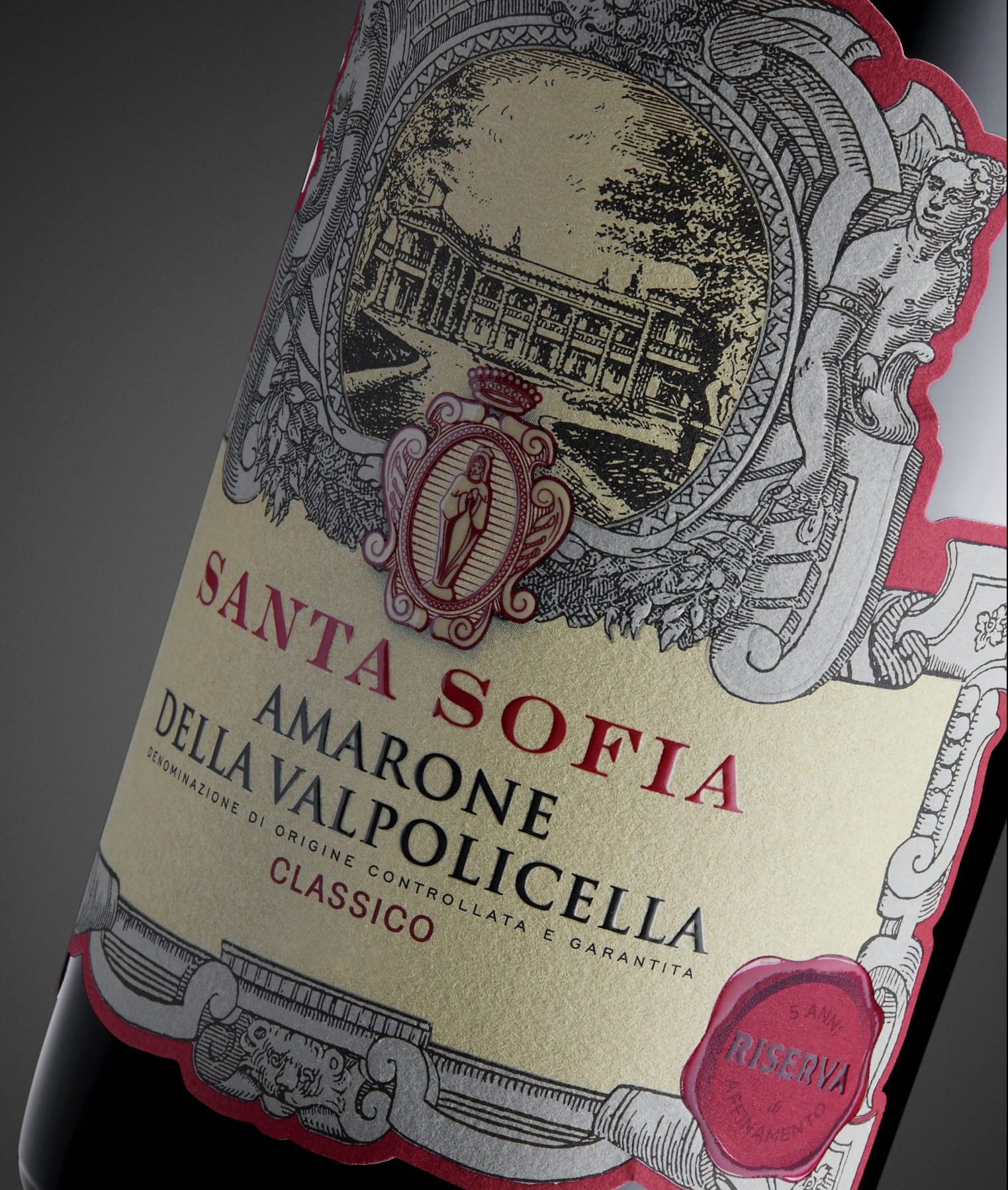 The long lasting story of the winery settled in Pedemonte, told through an exclusive tasting at La Cru restaurant in Grezzana, Verona, with chef Giacomo Sacchetto

The long lasting story of the winery settled in Pedemonte, told through an exclusive tasting at La Cru restaurant in Grezzana, Verona, with chef Giacomo Sacchetto

Red and gold leaves is the palette, hills, bright and tinge air and an unforeseen clear sky surprise our arrival in Valpolicella, precisely in San Pietro in Cariano, in the little city of Pedemonte. We stand at flowing history, shaped by quality and those fundamental principles that give birth to Santa Sofia’s wines, which headquarters are next to a Palladian Villa from 1565, “dedicated” to the production of wine since 1811.

Sofia is Wisdom (Sophia in Greek means wisdom): wisdom is cult of the land and human’s intelligence, of an unstoppable will to preserve, promote and valorize the sparkle of life of the region: Corvina, Corvinone and Rondinella, in other words, Amarone.

A wine which, from the point of view of Luciano Begnoni, current progeny of Santa Sofia, and Giancarlo, his father, is enriched by the distinct and deep taste of humanity.

A nectar that doesn’t need to be explained through numbers, ampelographic features – at least not only by these – because it makes possible to acknowledge it by its taste, and it goes deep inside you because it is infused with human sensibility.

Therefore, Luciano prefers to be exclusive host of the première tasting of Amarone della Valpolicella DOCG Classico Riserva 2013, paired with good food and his life turns’ tale: from the evolution of his personal company’s vision, to his personality; and then the incapacity to tolerate over takings, both while driving as in leading the company. His way of thinking that the real trouble is to deal with things when everything’s fine; going on with his entrepreneurial intuition in choosing a young team, “blank canvas” on which he can write down past history and future of Santa Sofia.

A tasting, we were saying, that records a timeline from 2018 to 2011, a walkthrough wines selected in the winery, parted in the fight for their identity but close in their coherence: “it doesn’t take power, it is not our priority – says Luciano – and neither we want to follow trends, but pursue pleasure, fine wines, the brotherly connection between Valpolicella Ripasso DOC Superiore 2018 and Gioè Amarone della Valpolicella DOCG Classico 2011, expression of a unique family, a timeless winery”.

Not by chance the 1 Michelin star restaurant La Cru, on Romagnano’s hills in Verona, was selected for a tasting with Santa Sofia. This is because the Begnoni family proudly consider their wines gastronomic, in harmony with the pairings thanks to their versatility, for the smoothness that dissolves the alcohol, giving life to soft and fresh wines, easy to pair both with home dishes as stew, as well as with the clear and materic proposals of Giacomo Sacchetto, chef of La Cru: a combination of garden and yard, elegance in cooking’s techniques and delicate veracity.

Through a back forwarded vertical, Luciano Begnoni explains the heritage of gestures, their vines’ knowledge, and of the fruit as well, passed on by his father Giancarlo; on the other hand, Luciano’s vision is geared to the future: even if he was just a boy when he started, he comprehended immediately that his life would have to develop through unpredictable patterns of life and not the other way around. We need to remember that life is a 360°C experience: it means selling, administration, work the land, and “always believe in what you are doing, until the very end, and not be discouraged by the circumstances”, comments Luciano.

Now let the wine talk: we start off with Valpolicella Ripasso Superiore 2018, a nectar which prefers to insist less on the structure to encourage the fruit, paired with the entrées. Right after, the Montegradella Valpolicella DOC Classico Superiore 2017: it soars its fragrance, of small crispy red fruits, served with Consistenze di Coniglio (hare’s texture), its jus and green apple. Then, Amarone.

It is a wine of great softness the Amarone della Valpolicella DOCG Classico 2016: 5 years (almost 2 ½  more in comparison to minimum wage of ageing time established by the Consortium) is the minimum waiting time for Amarone in Pedemonte’s winery, a period that allows this wine to evolve and complete its development in the cellars.

Room temperature between 13-15 °C, big barrels of Slavonian oak: each element aims to avoid the carpenter wines’ feeling, aka when the wines are too strong in wood; then the refining in the bottle, each one positioned in the cellar, one above the other, as bricks in a wall. This Amarone deglazes the risotto signed by Sacchetto, with capers, cornel and the enveloping sweetness of the pumpkin.

These glasses are anticipation of the actual main character of this evening, even if the charm flowed by every taste invites you to have another sip, to enjoy those personalities once opened. Until the celebration of the “new” Riserva: a higher production in comparison to Riserva 2012 (only 2000 bottles). With Riserva 2013, instead, the bottles are up to 6000, nevertheless the quality is not lower: a joyful wine, deep cherry red with garnet hues. Passing time and a bold structure don’t cage the range of aromas, not even the palette of tastes, with aromatic herbs (sage) and balsamic reminiscences, of underwood; an odd lightness, a comeback of ripe red fruits that is never too sweet.

A fresh roundness with a lively tannic texture, which stretches to the meeting with the Umori del Capriolo (roe deer), red currant, potatoes and Lessinia’s truffle, carrots and lemon grass.

The big closure is served both with Mora Romagnola (blackberry), oolong tea and cabbage with green apple, as with the dessert on Foliage, meaning Uva Fragola sorbet, chestnuts ganache and chocolate: the Gioè Amarone della Valpolicella DOCG Classico 2011.

Gioè as “this is joy” (in Italian the translation of the world joy is gioia, that sounds as Gioè), Gioè as the top of the hill of Monte Gradella, location of the historical vineyards in which Santa Sofia grapes are grown. Gioè as the name of the man that Giancarlo Begnoni knew and who worked in the parcel from which this wine takes its name. A meditation wine, not easy to understand; the last project of Giancarlo, sapid as wisdom.

The focus of all tastes is clearness, coherence and that elegance, thinness, dearest to Luciano. “We are glad to present a wine that we love, but above all that is loved. We cannot think about wine without making a concrete and objective projection of the market. These are my eyes”.

Eyes that never stop looking to the vine, the winery, the ecosystem of the winery, which soon will know a new location, less than a mile far from the actual headquarters; a project that, we are certain of that, will pursue that lively continuum that is Santa Sofia’s history: a message of passed on tradition, although always evolving.